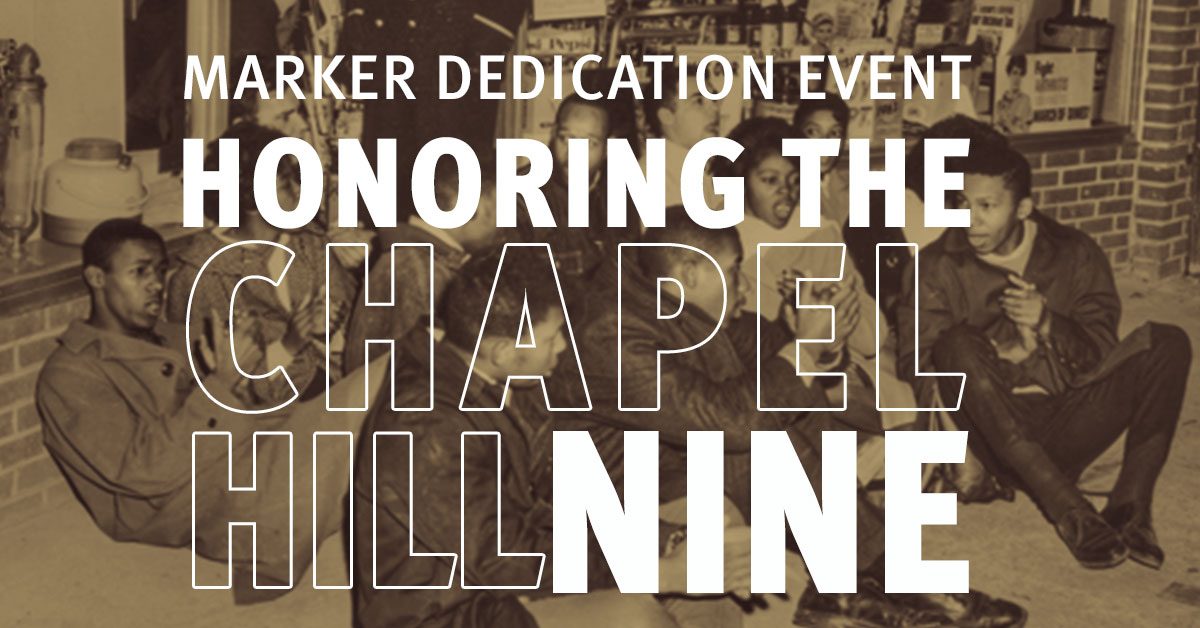 Marker Dedication Event Honoring the Chapel Hill NineOn Sunday, February 28, 1960, nine young men from Chapel Hill’s all-black Lincoln High School sat at a booth in the Colonial Drug Store and sought the same service that was given to white customers. Their courageous step led to their arrest and sparked a decade of direct-action civil rights demonstrations in Chapel Hill. Sixty years later, the Town of Chapel Hill will unveil a marker commemorating this historic event and honoring these community heroes. The Chapel Hill Nine Marker will be unveiled during a public ceremony at 4:00 pm on Friday, February 28 at 450 West Franklin St.

In 2017, Mayor Hemminger formed the HCRC to document the history of the Civil Rights Movement in Chapel Hill, including the Chapel Hill Nine sit-in. The Task Force took a deep dive into community history and their work resulted in a mobile timeline, a short film, public programs, and Town Council approval for a permanent marker recognizing the Chapel Hill Nine at the site of the sit-in. Mayor Hemminger says of the planned ceremony “As we strive to tell the whole story of our town’s journey to be a more just and inclusive community, we owe the Chapel Hill Nine and many others a debt of gratitude for leading us forward with courage. I hope everyone will join us in thanking them.”

After community engagement and a series of design workshops, the marker was envisioned as a fusion of public art and historical monument. Designed by Durham artist Stephen Hayes, with project management by Alicia Hylton-Daniel, it features documentary photography from the era, the names and ages of the Chapel Hill Nine, and a base that evokes the rock walls of the Northside neighborhood where this and many other demonstrations and actions were planned.

Molly Luby, Special Projects Coordinator at Chapel Hill Public Library and staff liaison to the HCRC, notes that installing the marker on the sixtieth anniversary of the sit-in is meaningful to all involved. “Throughout this process, we felt a sense of urgency. Only four members of the Nine are still living and the HCRC was clear in their desire to honor these men within their lifetimes. We hope to see a great community turnout to honor these heroes on this anniversary.”

To facilitate a successful event, West Franklin Street will be closed from Roberson to Kenan St beginning at approximately 3:30 pm. No vehicular or on-street parking will be allowed and Chapel Hill Transit routes will be detoured. The street is expected to re-open by 5:00 pm. To find parking decks and surface lots downtown, visit parkonthehill.org. 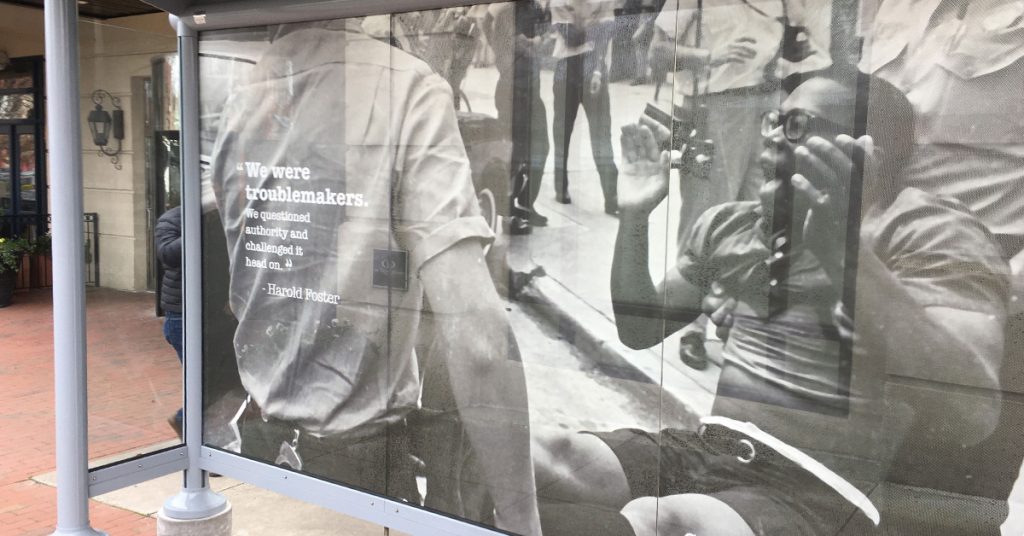 Historic Civil Rights Bus Shelter Franklin StreetEarlier this year, Chapel Hill Transit transformed three of its most visible downtown bus shelters with documentary photographs from the Civil Rights Era in Chapel Hill. These dramatic photographs include images of protestors shutting down Franklin Street, picketing, and being arrested by police. The shelters are located on Franklin Street in front of the Franklin Hotel and also in front of Moe’s restaurant, and on Columbia Street near Town Parking Lot 2. The idea for these shelters came from Chapel Hill Transit Director Brian Litchfield as part of the larger Art + Transit project that actives Transit infrastructure in engaging and artful ways.

Re/Collecting Chapel Hill Podcast. Season 1 of Chapel Hill Public Library’s history podcast has featured the untold stories behind historic markers and monuments. The final episode of season 1, set to be released in early March, will focus on the Chapel Hill Nine and the new historical marker. Listen to all of the episodes at chapelhillhistory.org/podcast

Chapel Hill Public Library has a Civil Rights in Chapel Hill Timeline Exhibit, called Opening Our Future, which is available to loan to schools, churches, community organizations, and any others who are interested in showcasing this important community history. There are also history trading cards that accompany the exhibit, available on a limited basis. Contact Molly Luby at Chapel Hill Public Library for details about borrowing the exhibit.

WOMEN OF THE MOVEMENT

Later this spring, the Town will open an exhibit highlighting the contributions of Chapel Hill’s African American women elders. The goal of this exhibit is to educate and inspire local people and to honor the women who have contributed so much to the Chapel Hill community through a public history exhibit that is interactive, accessible and engaging for a broad audience.