75th Anniversary of the Journey of Reconciliation 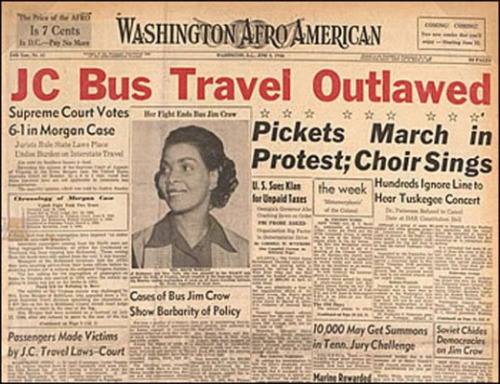 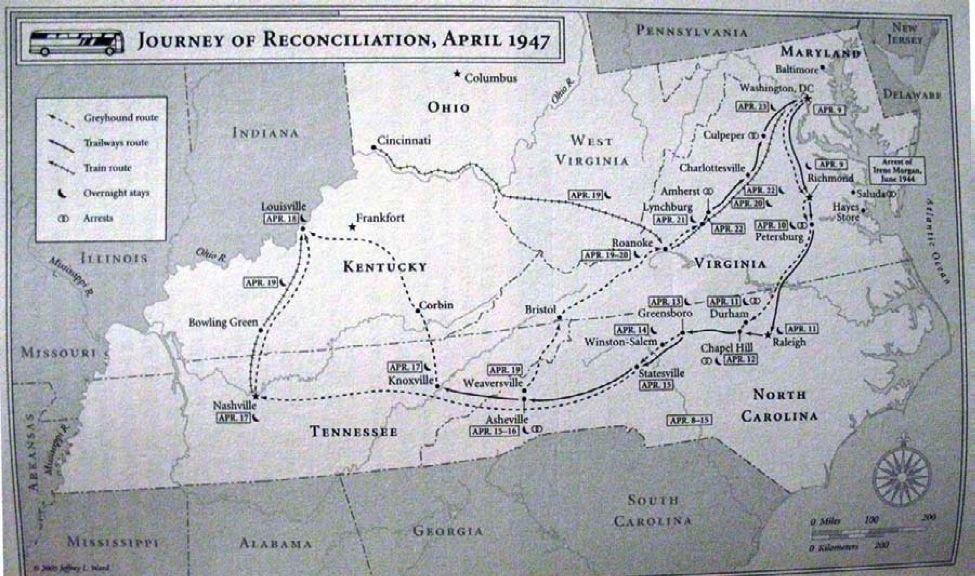 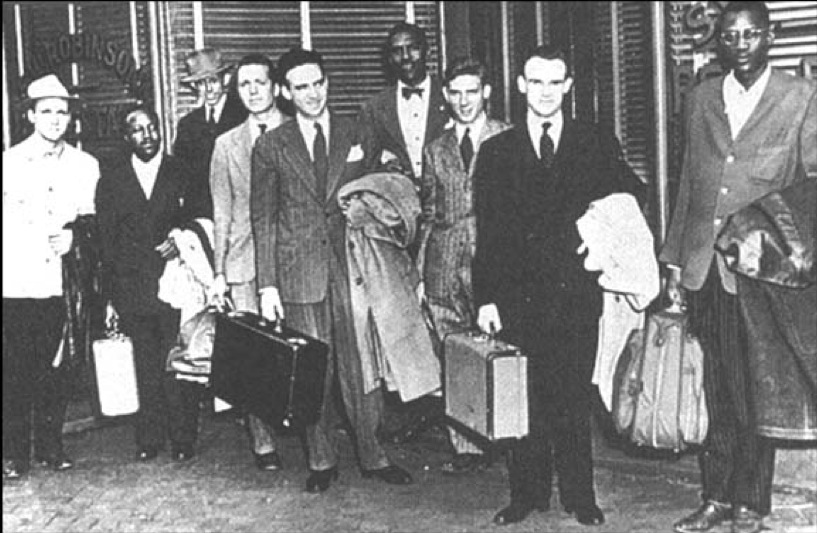 In 1947, Chapel Hill, like the rest of the south, was a Jim Crow town. Public spaces were segregated by race. Sundown laws were in effect, restricting the movement of Black people to specific neighborhoods. And on buses, front seats were reserved for white passengers only.

On July 16, 1944, Irene Morgan defied Virginia authorities by refusing to change her seat on a segregated bus in Virginia. Morgan was travelling from Virginia to Maryland, when she was told by authorities that she had to move to the back of the bus.

When handed an arrest warrant, she tore it up and tossed it out the window.

Irene Morgan appealed her conviction to the United States Supreme Court and in the landmark 1946 ruling, Morgan v. Virginia, the U.S. Supreme Court ruled 7-1 that segregation on interstate travel was unconstitutional.

On April 9, 1947, an interracial group of eight white and eight Black men commenced the first freedom ride on buses leaving Washington D.C.. They planned to travel along a two-week route through the Upper South, including stops in Durham, Chapel Hill, and Greensboro.

The riders landed in Chapel Hill on April 12. They were greeted by Reverend Charles M. Jones and spent the day with students and other clergy members.

Four riders, Andrew Johnson, James Felmet, Bayard Rustin, and Igal Roodenko, were arrested for disorderly conduct for refusing to move from the front of the bus. After bond was posted, Reverend Jones drove the riders to his home while pursued by a car of angry white men, armed with sticks.

Ultimately, the riders fled from Chapel Hill to Greensboro by car because of local threats of violence to the riders and to Reverend Jones and his family.

In May 1947, those members who had been arrested in Chapel Hill went on trial and were sentenced to 30 days on the chain gang. Their subsequent time serving on a chain gang led Rustin to write about the experience. His serialized journal led to major reforms in the North Carolina prison system.

Bayard Rustin’s published writings about the Journey of Reconciliation inspired Rosa Parks’s nonviolent protest in 1955 and the Freedom Rides of 1960-61. 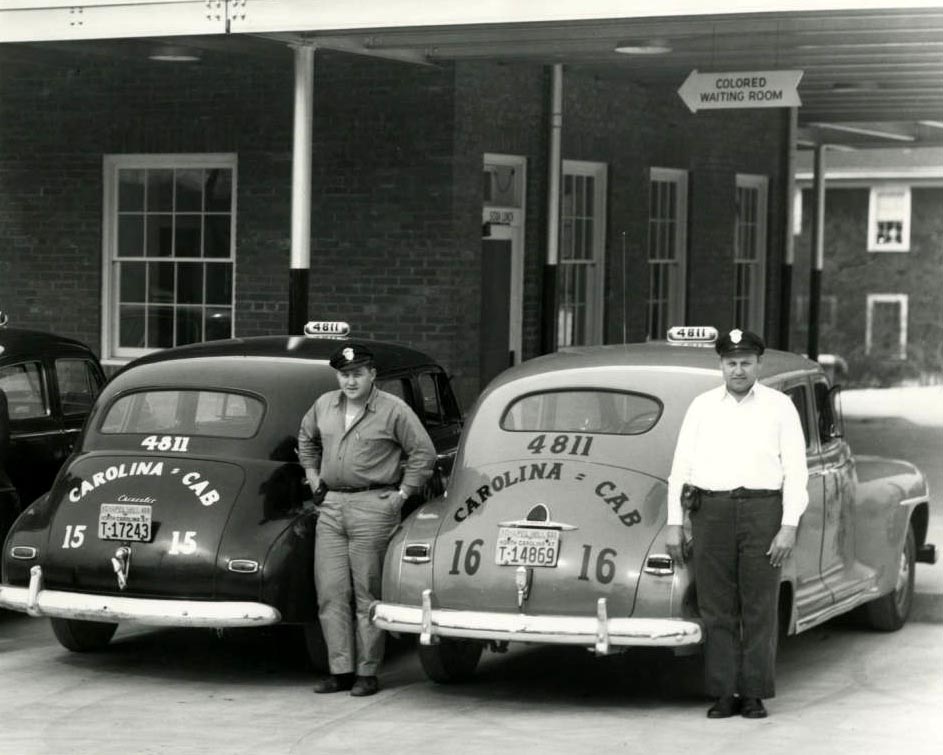 “Most Americans know something of the Civil Rights Movement: the speeches of Martin Luther King, the Freedom Rides of the 1960s and the March on Washington. But there were earlier actions that also profoundly changed our country’s history. One of great significance to the Civil Rights Movement but nearly lost to that history was the Journey of Reconciliation. This is the story of that ride." -Robin Washington, filmmaker

Most Americans know something of the Civil Rights Movement: the speeches of Martin Luther King, the Freedom Rides of the 1960s and the March on Washington. But there were earlier actions that also profoundly changed our country’s history. One of great significance to the Civil Rights Movement but nearly lost to that history was the Journey of Reconciliation. This is the story of that ride.

Join us for a special film screening at the Chelsea Theater in Chapel Hill, followed by a community conversation led by local historian, Danita Mason-Hogans.

Seating for this event is limited. Please register to reserve your spot.

Keeping Your Seat to Take a Stand: Sarah Keys Evans & the Fight Against Jim Crow TransportationThursday, May 12, 5:30-7 pm | Live and Virtual

On Aug. 1, 1952, six years after the landmark Morgan v. Virginia case in 1946, five years after the 1947 Journey of Reconciliation set out to test its decision, and three years before the better known Montgomery Bus Boycott, 22-year-old Washington, NC native Sarah Keys, a Women’s Army Corps private, was wrongfully arrested in Roanoke Rapids, NC for refusing to relinquish her seat to a white man on an interstate charter bus. Yet, Sarah Keys refused to be intimidated, both that night and throughout the years to come. She saw her case through as it was brought before the Interstate Commerce Commission, with another trailblazer, Dovey Johnson Roundtree, as her lawyer. Finally, in 1955, in the landmark case Sarah Keys v. Carolina Coach Company, the ICC favored Mrs. Keys Evans, ruling that the Interstate Commerce Act forbids segregation. Join Carolina K-12, the North Caroliniana Society, and the Sarah Keys Evans Inclusive Public Art Project to explore the courageous actions of Mrs. Sarah Keys Evans with top scholars & community historians. K-12 teachers who attend can choose a book to be mailed to them after the event!

Details and registration are at https://humanities.unc.edu/sarahkeys/

The 1947 Journey Of Reconciliation: A Long Road To Justice Friday, May 20, 2 – 4 pm | Hillsborough Courthouse

Join the 18 Judicial District of NC, Carolina Public Humanities, and other community partners on Fri. May 20th (2 pm) at the historic Hillsborough Courthouse, 75 years after the “First Freedom Ride,” as we commemorate the 75 year anniversary of this legal travesty. This FREE, dynamic event will include:

This is event is FREE and open to the public. Registration is not required, but is requested to help us prepare for attendance numbers.

CLICK HERE FOR IN-PERSON REGISTRATION (Requested, but not required)

Funding for this event is provided by Humanities for the Public Good, an initiative at UNC-CH’s College of Arts & Sciences.

75 years ago this week, in 1947, an interracial group of Freedom Riders came to Chapel Hill. Their journey aimed to test whether court orders banning segregation on interstate buses would be followed. Here in Chapel Hill the Freedom Riders encountered violent persecution.  The riders were also welcomed by Reverend Charlie Jones, who provided protection and assistance. This morning, we retell this story from our history and explore its meaning for us today. Reverend Thom Belote preaching.

Sunday services at University Presbyterian will feature the story of The Journey of Reconciliation. In 1947, Reverend Charles M. Jones was the pastor at UPC.

Join University Presbyterian Church and Community Church of Chapel Hill for a community walk visiting the Chapel Hill sites involving the Journey, while engaging with the story of how events unfolded. Participants should meet in the UPC parking lot at 1:45 pm to walk, explore and reflect together.

Art + Transit aims to bring more artistic vibrancy to the daily commute and enliven unsuspecting spaces throughout Chapel Hill.  As part of this initiative, Art + Transit will be commemorating the Journey of Reconciliation at the bus shelter at the Rosemary Street & Columbia Street parking lot.

Deepen your knowledge Teach about the Journey and related history 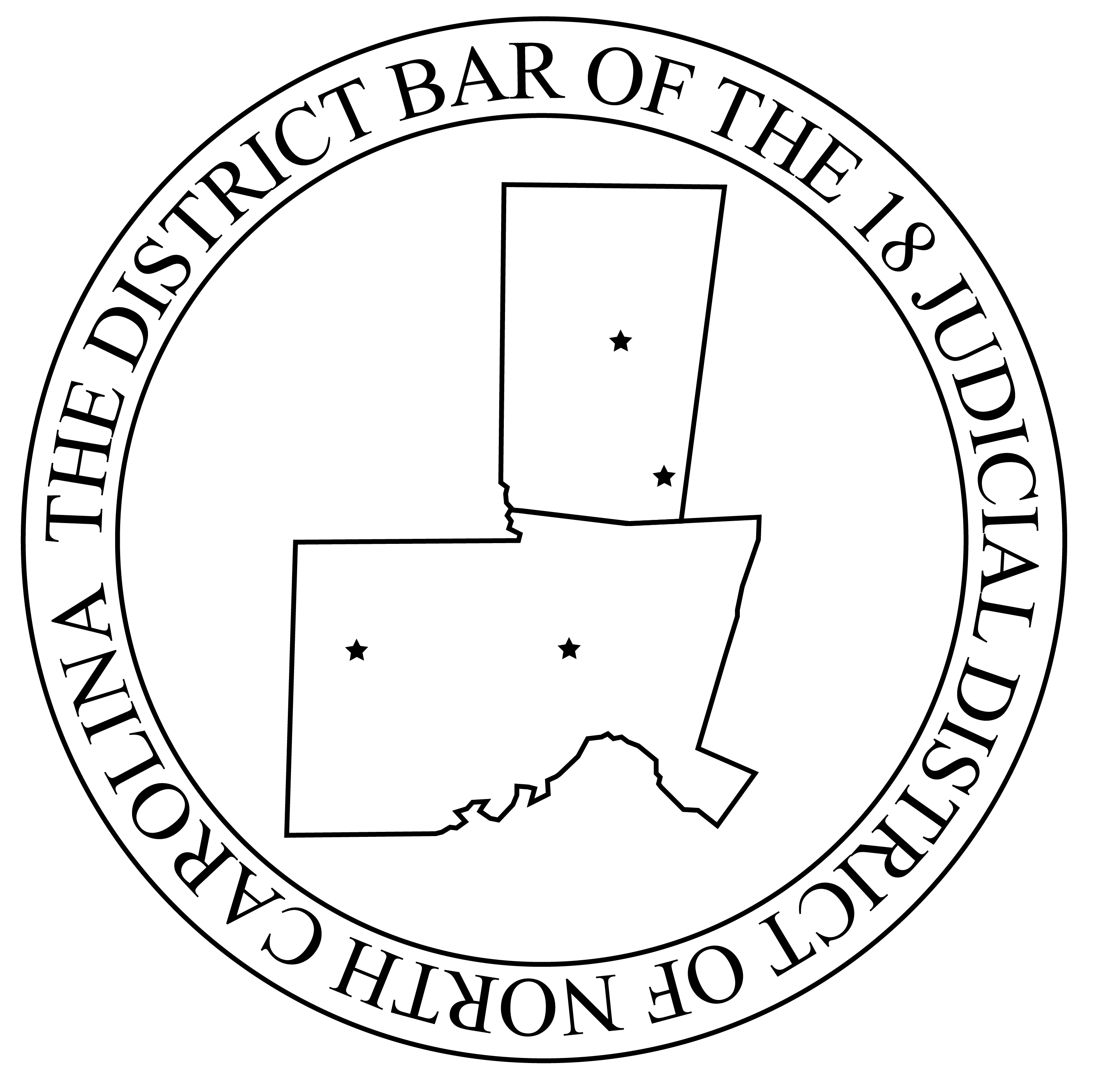