Join Chapel Hill Public Library staff and community members as we uncover the untold histories of Chapel Hill, from the inside out and bottom up. In our first season, we are exploring the histories behind the monuments and markers of Chapel Hill. 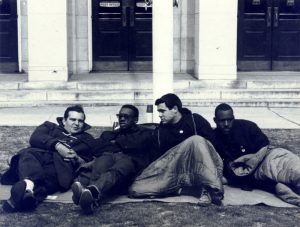 Our first stop: Peace and Justice Plaza. “The Peace and Justice Plaza honors the energy and spirit of the thousands who have stood in the shadow of the Courthouse and exercised their rights to assembly and speech and have spoken out on issues as diverse as the Vietnam War, environmental justice, women’s rights, gay rights, the death penalty, and racial justice.”

Learn how this one spot in Chapel Hill became the place for people to practice free speech and their right to assemble.

And here is Jerry Neville’s spotify playlist of music from the 1960s.

With thanks to all of the voices you hear in this episode: CJ Suitt, William Sturkey, Linda Haac, Norma Bell, and Delores Bailey. You’ll hear more from them in upcoming episodes more fully.

Get the latest episodes of Re/Collecting Chapel Hill automatically using the links at the top of this post, or by copying and pasting the URL below into your favorite podcast app: https://feeds.fireside.fm/recollectingchapelhill/rss