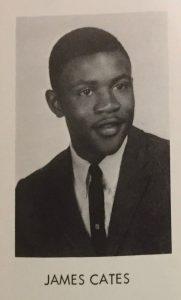 Join Chapel Hill Public Library staff and community members as we uncover the untold histories of Chapel Hill, from the inside out and bottom up.

In this episode, we share the story of James Cates. James was born and raised in Chapel Hill. In 1970, when he was just 22-years-old, he was murdered on UNC campus.

Journalist Mike Ogle has spent years researching the life and death of James Cates. We’ll share his work and hear from community members who knew Cates, including those with him when he died.